You are here: Home / Archives for The Killers 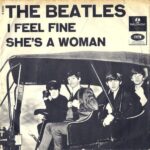 1964, Working at Abbey Road studios in London, The Beatles recorded their next single "She's a Woman" in seven takes, plus overdubs, recording the song from start to finish in five hours. 1964, Roy Orbison was at No.1 on the UK singles chart with "Oh Pretty Woman," his third UK No.1. The title was inspired by Orbison's wife Claudette interrupting a conversation to announce … END_OF_DOCUMENT_TOKEN_TO_BE_REPLACED