You are here: Home / Archives for The New Seekers

1964, The Dave Clark Five were at number one on the singles chart with "Glad All Over," the group's only chart topper. 1964, The Beatles played two shows at the Olympia Theatre, Paris, France, the first of an 18-night engagement. The first show was attended mostly by Paris' top society members, all dressed in formal evening attire. The French press had little good to say … END_OF_DOCUMENT_TOKEN_TO_BE_REPLACED 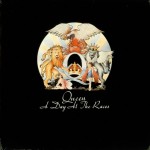