You are here: Home / Archives for The Psychedelic Furs 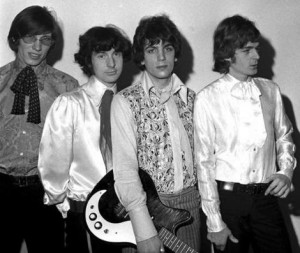 1966, The Who perform at the Tower Ballroom in Great Yarmouth, England. The band’s road manager, Neville Chesters, joins The Who onstage to sing “You Were On My Mind.”

1967, At a ceremony held at the Playhouse Theatre in London, The Beatles were awarded three Ivor Novello awards for 1966: Best-selling British single “Yellow Submarine,” most-performed song “Michelle,” and next-most-performed song “Yesterday.” None of the Beatles attended and the winning songs were played by Joe Loss and his Orchestra. The lead vocal for “Michelle” was sung by Ross MacManus, whose son would go on to become the professional musician Elvis Costello.

1968, The Grateful Dead played at the Grande Ballroom in Detroit, Michigan.

1969, During a UK tour Stevie Wonder played two shows at the Coventry Theatre in the West Midlands. Also on the bill, The Foundations, The Flirtations and Emperor Rosko.

1970, Although the Beatles had abandoned the tracks originally cut for Let It Be, their business manager, Allen Klein, invites Phil Spector to remix the recordings. Spector’s tampering with the original recordings further alienates Paul McCartney from the band.

1970, Led Zeppelin played at Memorial Coliseum in Portland, Oregon. The next day’s Oregon News reported, “Led Zeppelin, the four-man demolition squad disguised as a rock group, pushed aside a series of boring solos Monday night and laid out Portland music fans with some good old rock and roll. Playing to an estimated 7,000 people in the Memorial Coliseum, they plodded along with excessive instrumental solos, repeatedly asking the crowd to loosen up until they heard what they came to hear – loud, driving rock music.”

1971, Led Zeppelin performed the last of the Back to the clubs tour dates at the Marquee in London.

1972, The film of The Concert For Bangladesh featuring George Harrison, Bob Dylan and Eric Clapton premiered in New York. The event was the first benefit concert of this magnitude in history. The concert raised almost $250,000 (£166,667) for Bangladesh relief, which was administered by UNICEF. Sales of the album and DVD continue to benefit the George Harrison Fund for UNICEF. By 1985, through revenue raised from the Concert for Bangladesh live album and film, an estimated $12 million had been sent to Bangladesh in relief. It would be the inspiration for LiveAid and future relief based mega-events.

1973, John Lennon was ordered to leave the US within 60 days by the immigration authorities; he began a long fight to win his “Green” card which he was given on July 27, 1976. Yoko Ono is granted permanent residency in the US.

1974, Marvin Gaye and Diana Ross entered the UK singles chart with “You Are Everything” which was originally recorded by the Philadelphia soul group The Stylistics. Released as the second UK single from the Diana & Marvin album, the song reached numbrer five in the UK Singles Chart.

1974, Cher went to number one on the US singles chart with “Dark Lady,” the singer’s third solo chart topper. It reached number 36 in the UK.

1975, Neil Young, as well as Bob Dylan and the Band, performed at Kezar Stadium in San Francisco.

1977, Elvis Presley appeared at Arizona State University in Tempe, Arizona. This was the first date of 49-date US tour over three months and Presley’s last ever tour. His final live performance was on  June 26, 1977 at Market Square Arena in Indianapolis, Indiana.

1980, The Psychedelic Furs and The Teardrop Explodes appeared at The Lyceum Ballroom, London.

1983,  The Smiths played their first ever London show at The Rock Garden, London, England.

1985, Former Creedence Clearwater Revival front man John Fogerty went to number one on the US album chart with Centerfield.

1990, Fleetwood Mac kicked off their Behind The Mask world tour with 14 dates in Australian starting at the Boondall Entertainment Centre in Brisbane, Australia.

1991, R.E.M. scored their first UK chart topping album with their seventh LP, Out Of Time, featuring the singles “Losing My Religion” (which became R.E.M.’s highest-charting hit in the US, reaching number four,) and “Shiny Happy People.” The video for “Losing My Religion” won two Grammy Awards and six MTV Awards.

2008, Neil Aspinall, who ran the Apple Corps music empire for the Beatles from 1970 – 2007 died at a hospital in New York from cancer aged 66. A school friend of Sir Paul McCartney and George Harrison, he was regarded by some of the band as the “fifth Beatle” becoming the Beatles’ road manager in 1961 before becoming their personal assistant. He led the legal battle with Apple computers over the use of the Apple name and a royalties dispute between the Beatles and record label EMI. Aspinall had also played background instruments on Beatles tracks including “Magical Mystery Tour,” “Within You Without You” and “Being for the Benefit of Mr Kite.”

2020 and 2019: Thanks to everyone who continues to support us. The current licensing to legally play all the music you hear on Acid Flashback costs almost $2000 a year. Please help us defray this and other costs with a donation of any amount. … END_OF_DOCUMENT_TOKEN_TO_BE_REPLACED