You are here: Home / Archives for The Replacements 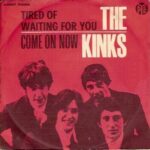 1965, The Kinks were at number one on the singles chart with "Tired Of Waiting For You," the group's second chart topper. 1965, Working at Abbey Road studios in London, The Beatles recorded two new songs. John Lennon's "You've Got to Hide Your Love Away" was recorded in nine takes, and a new Paul McCartney song "Tell Me What You See" was laid down in four takes. 1966, … END_OF_DOCUMENT_TOKEN_TO_BE_REPLACED