You are here: Home / Archives for The Six And Seven Eighth String Band Of New Orleans ~ Clarinet Marmalade 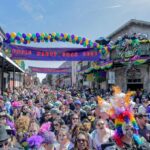 This is The 3D RadioActivity number 574, it's Uncle Marty Gras as we take our yearly trip to the mouth of the Missisip, so grab some chicory coffee and a begnet or paczki as we get the party going! As North America's second largest river empties into the gulf of Mexico, The Crescent City is the birthplace of jazz, zydeco, Cajun, other Anglo French influences, and swamp … END_OF_DOCUMENT_TOKEN_TO_BE_REPLACED