You are here: Home / Archives for The Troggs 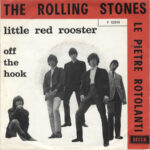 1964, Decca Records released The Rolling Stones’ "Little Red Rooster." Written by Willie Dixon, as "The Red Rooster," and previously recorded by Howlin’ Wolf and Sam Cooke, the single was recorded at Chess Studios in Chicago. It was a number one hit in the UK and remains the only time a blues song has ever topped the UK pop chart. 1965, The Castiles, which featured a young … END_OF_DOCUMENT_TOKEN_TO_BE_REPLACED

1965, The Beatles were at number one on the UK singles chart with "Ticket To Ride." Taken from the film Help! it was the group's seventh UK chart topper. 1966, "Wild Thing" by The Troggs (who were originally called The Troglodytes) was released in the US on both the Atco and Fontana labels. The song went on to reach number one. Fronted by Reg Presley, "Wild Thing" became a … END_OF_DOCUMENT_TOKEN_TO_BE_REPLACED

1966, The Troggs recorded "Wild Thing" at Regent Sound Studio in London. The song went on to be a chart topping US and number two UK hit in June the following year. 1966, The Who and The Yardbirds appear together in a live French edition of Ready, Steady GO! called, appropriately, Ready, Steady, Allez! According to producer Vicki Wickham, both groups run out of the studio … END_OF_DOCUMENT_TOKEN_TO_BE_REPLACED