You are here: Home / Archives for The Veltones ~ Fool In Love

The Veltones ~ Fool In Love 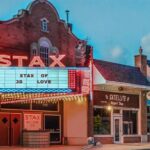 Stax Studios, on McLemore Ave,in Memphis, was founded in 57 as Satellite Records. The company changed its name in 61 and shared its operations with Volt, a sister label created to avoid the impression of favoritism among radio stations playing their records. They also were affiliated with Atlantic, CBS, Warner, and Fantasy over the years. Influential in the creation of Southern … END_OF_DOCUMENT_TOKEN_TO_BE_REPLACED