You are here: Home / Archives for Trevor Siemian 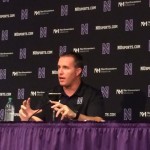 The Northwestern Wildcats football team addressed members of the media on Thursday to discuss the upcoming 2014 season. The main topic of discussion was concerning the potential obstacles up ahead and overcoming a forgettable 2013 season. After starting last year with a 4-0 record and securing the 16th rank in the nation, the Wildcats lost seven of their last eight games and … END_OF_DOCUMENT_TOKEN_TO_BE_REPLACED