You are here: Home / Archives for Unit Four Plus Two 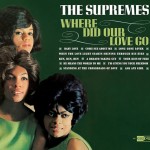 1964, The Supremes record "Where Did Our Love Go" at Motown Studios in Detroit. The song would become the first of their five number one singles. 1965, Unit Four Plus Two were at number one on the singles chart with "Concrete And Clay," the English group's only chart topping hit. 1966, The Who played at Queens Hall in Leeds, West Yorkshire, England. 1967, Otis Redding, … END_OF_DOCUMENT_TOKEN_TO_BE_REPLACED