You are here: Home / Archives for Willie Mabon ~ Seventh Son 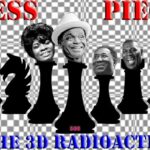 I'm Uncle Marty, as The 3D RadioActivity turns to chapter 565 by taking another listen and look at the company who produced and released discs to become regarded as "America's greatest blues label". It was named after founders Leonard and Phil Chess, two Jewish brothers from Poland, whose keen ear and tastes put many legends in the spotlight. Let's check our glucose levels with … END_OF_DOCUMENT_TOKEN_TO_BE_REPLACED