You are here: Home / Archives for Young The Giant 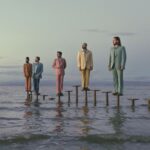 Multi-platinum band Young the Giant releases the music video for “My Way” from ACT II: EXILE the second act of their fifth studio album, American Bollywood, which will be released on October 21 via AWAL/Jungle Youth Records – listen everywhere now. The album is being revealed in four acts, with two acts remaining: Battle and Denouement.  American Bollywood will be the … END_OF_DOCUMENT_TOKEN_TO_BE_REPLACED