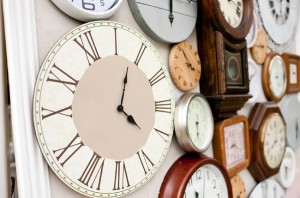 Check your clocks, radio listeners!  Does Anybody Really Know What Time It Is?

Because it is Leap year, and due to the fact that you hopefully moved your clocks ahead an hour, this episode of The Award Winning 3D RadioActivity is all about time.  Daylight saving time is the practice of advancing clocks so that evenings have more daylight and mornings have less.

Though mentioned by Benjamin Franklin in 1784, Modern DST was first proposed by the New Zealand entomologist George Vernon Hudson, whose shift-work job gave him leisure time to collect insects, and led him to value after-hours daylight. Speculation that it was hypothesized by Konrad Adenauer is untrue, he came later, as Chancellor of West Germany from 1949 to 1963.  Adding an hour was first implemented during the First World War.  Starting on April 30 1916, Germany and its World War I allies were the first to use DST as a way to conserve coal during wartime.

Two contrasting viewpoints on time divide many prominent philosophers. One view is that time is part of the fundamental structure of the universe, a dimension in which events occur in sequence. Sir Isaac Newton subscribed to this realist view, and hence it is sometimes referred to as Newtonian time.  This second view, in the tradition of Gottfried Leibniz and Immanuel Kant, holds that time is neither an event nor a thing, and thus is not itself measurable nor can it be travelled.  Other opinions suggest that time is like a ray, having a beginning but going on forever into the future, sort of like radio waves!  Check it out here:
http://www.archive.org/download/The3dRadioactivity/3dradio_20120312_TimeII.mp3

Next week we will play our yearly Saint Patrick’s Day tribute.  If you have any requests, be sure to let me know so I can fit them in.

What do you want to hear after that?  In three weeks, we will feature some great gospel music, and the week after that will be The Awards Show, where we will play music that has won some major award, as a way to salute The 3D RadioActivity being recognized by The 2012 BEA/NAB in the Specialty Radio Program category.

For more details, be sure to check out the program’s FaceBook page:
The 3D RadioActivity
…Uncle Marty

“It’s not true I had nothing on, I had the radio on.”
…Marilyn Monroe