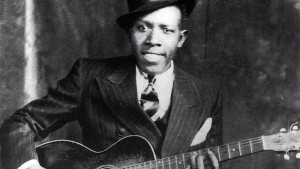 1938, American blues musician Robert Johnson died, likely poisoned by a jealous husband, at the age of 27 at a country crossroads near Greenwood, Mississippi. His recordings from 1936 -1937 have influenced generations of musicians including Muddy Waters, Bob Dylan, Jimi Hendrix, Led Zeppelin, The Rolling Stones, Johnny Winter, Jeff Beck and Eric Clapton.

1962, Twelve -year old “Little” Stevie Wonder released his first single, “I Call It Pretty Music, (But The Old People Call It The Blues.)” The single featured Marvin Gaye on drums.

1962, Brian Epstein told Pete Best that the other Beatles wanted him out of the group, and that he was being replaced. Epstein then asked Best to perform with The Beatles that night at the Riverpark Ballroom in Chester, Cheshire. Pete Best does not show up, drummer Johnny Hutchinson of The Big Three filled in the temporary vacancy.

1964, The Who played at the Opera House in Blackpool, Lancashire, England.

1966, During a US tour, The Beatles appeared at the John F. Kennedy Stadium, Philadelphia playing their set during a huge electric storm.

1966, The Byrds played the first of two nights at the Fillmore Auditorium, San Francisco, California.

1968, The Jackson Five made their formal debut with Diana Ross and The Supremes at the Great Western Forum in Inglewood, California.

1968, Working at Abbey Road studios, The Beatles recorded 14 takes of the new George Harrison song “While My Guitar Gently Weeps,” taking the song from its early acoustic version into an electric version.

1968, Bruce Springsteen’s new band Earth made their live debut at the Off Broad Street Coffee House in Red Bank, New Jersey, admission was 75 cents (£0.47). The lineup of the group consisted of Springsteen on guitars and vocals, John Graham, bass, Michael Burke, drums and Flash Craig on the organ. The group lasted only six months.

1968, Pink Floyd play the first of two nights at Sound Factory in Sacramento, California. Also on the bill are Initial Shock and AB Skhy Blues Band.

1969, The Grateful Dead perform the following set at Woodstock: Saint Stephen-> Mama Tried, Dark Star-> High Time, Turn On Your Love Light. There were electrical problems, as well as rain, and possibly the band performing while having taken a lot of acid.  The Dead were not pleased with the performance, and have not allowed it to be published.  Nor was it in the concert film.

1969, During a North American tour Led Zeppelin appeared at the Convention Hall in Asbury Park with Joe Cocker as support. Zeppelin had been asked to perform at Woodstock but due to this gig commitment were unable to attend.

1969, Bruce Springsteen’s band Child played the first of two shows over two days at the Student Prince, Ashbury Park. Springsteen was also unable to attend Woodstock due to these gigs.

1969, Hippie leader Abbie Hoffman was knocked offstage by Pete Townshend while attempting to make a political statement during the Who’s set at Woodstock. Later, Townshend said he didn’t know it was Hoffman at the time.

1971, The Who and Wishbone Ash perform at Southern Illinois University in Edwardsville, Illinois.

1971, The Allman Brothers Band appeared at the Civic Center in Philadelphia, Pennsylvania.

1974, The Ramones make their CBGB debut on this date. They would go on to play seventy more shows that year as a regular attraction at the famous club in New York.

1975,  Peter Gabriel announced that he was leaving Genesis. Gabriel had informed the band back in late November 1974 of his decision, but agreed to stay through the conclusion of the Lamb Lies Down on Broadway tour. The group auditioned more than 400 singers during the next 18 months before deciding that Phil Collins, who had been the drummer for Genesis since 1970, could front the band. 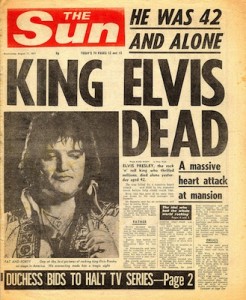 1977, Elvis Presley was found dead lying on the floor in his bathroom by his girlfriend Ginger Alden. He had been seated on the toilet reading “The Scientific Search For Jesus.” He died of heart failure at the age of 42.  He starred in 31 films. Elvis holds the record for the most entries on the US Hot 100 chart with 154. Elvis became the first rock ‘n’ roll artist to be honored by the US Postal Service with a stamp.

1979, The biggest single of the summer in the US, The Knack’s “My Sharona” was awarded a Gold record for selling one million copies. The Knack’s Doug Fieger wrote the song for his girlfriend, Sharona Alperin, whose picture appeared on the single’s cover.

1980, The Allman Brothers Band appeared at the Coliseum in Greensboro, North Carolina.

1983, After dating for six years, Paul Simon married actress Carrie Fisher. The marriage would last less than two years, but the two continued to date off and on after they split. The title track to Simon’s Heart and Bones album references their romance.

1986, Madonna started a two week run at number one on the US singles chart with “Papa Don’t Preach.” It was the singer’s fourth US chart topper and was also number one in the UK. Also on this day Madonna went to the top of the US album chart with True Blue.

2000, Alan Caddy guitarist with The Tornadoes died. He had the 1962 UK and US number one single “Telstar” which became the first major hit from a UK act on the American chart. Caddy also played on sessions and worked on arrangements for Spencer Davis Group, Kiki Dee, Pretty Things and Dusty Springfield.

2005, P Diddy appeared on the US TV Today Show and announced that he was altering his stage name again, dropping the “P” and referring to himself simply as “Diddy.” The name change to Diddy upset Richard “Diddy” Dearlove, a London based DJ who took out court proceedings against P Diddy over the use of the name. He won when an out of court settlement of £110,000 was agreed and as a result, Combs is no longer be able to use the name Diddy in the UK.