This Sunday at Bank of America Stadium in Charlotte, there will be two 2-2 teams taking the field that have much to prove to themselves and their respective fan bases. The Bears and Panthers both surrendered a season high in points, 38, last week in their losses. Both teams lost by 21 or more points and they scored a combined 3 points in the second half. Going into week 5 last year, the Bears at 3-1 had their eye on the playoffs but limped into the offseason by losing 7 of their last 12 games and missing the playoffs. The Panthers at 1-2, rattled off 11 wins and clinched the NFC South title under ex-Bear Ron Rivera but lost to the 49ers at home in the divisional round of the playoffs.

If coming off a tough loss was not bad enough, head coach Marc Trestman informed the media on Thursday at his weekly press conference that Jermon Bushrod suffered a knee injury, “accidentally at practice” on Wednesday. Bushrod now joins center Matt Garza and left guard Matt Slauson (both limited in practice) on the injury report which means that Michael Ola would have to slide over to left tackle and Eben Britton would be in at left guard if Bushrod and Slauson are unable to play. In other Bears injury news, Shea McClellin (hand) is out Sunday and Jeremiah Ratliff did not participate in practice as he has not passed his concussion tests.

Quarterback Jay Cutler knows all too well what it feels like to not have a legitimate left tackle blocking for him but is pleased with the offensive line depth GM Phil Emery brought in during the offseason. The Bears catch a break with the Panthers Pro Bowl defensive end Greg Hardy out because of his domestic violence case and his replacement Frank Alexander suspended 10 games for violating the substance abuse policy. 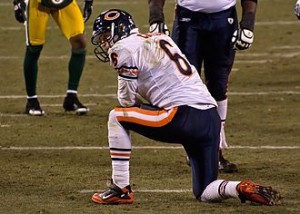 The Bears will look to stay perfect on the road this season as they are 2-0 and averaging 27.5 PPG compared to 18.5 PPG at home. The defense is also playing better on the road only giving up 19.5 PPG and forcing 7 turnovers, while at home allowing 31.5 PPG and only 1 turnover. When asked about why the Bears are better on the road then at home, Cutler playfully responded, “I guess we don’t like you guys (Chicago media) that much… I don’t know.” Even with the nice start for the Bears defensive on the road, Cam Newton has been one of the best in the league protecting the ball and not turning it over. Newton still is not 100% after his ankle surgery over the summer and has only rushed 8 times for 33 yards. Either way, the Bears will need to contain Newton since Carolinas running back situation is in shambles as DeAngelo Williams, Jonathon Stewart and Mike Tolbert are likely out leaving Darrin Reaves to carrier the load.

With 10 of the 16 teams in the NFC at 2-2 or worse going into Sunday, week 5 will determine what half of the conference the Bears will be in starting the 2nd quarter of the season.

Kelvin Benjamin vs. Kyle Fuller- Look for Cam Newton to air it out this Sunday as it will be the battle of the offensive and defensive rookies of the month for September