You are here: Home / Music / Alternative / Booth Reviews: Steven Wilson at the Park West in Chicago 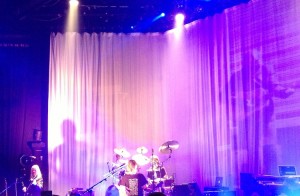 If Steven Wilson wanted publicity, he’d be a household name.  You may not have heard of him, but some of the biggest names in progressive rock have sought him out for his production skills.  The growing list includes, ELP, King Crimson, and Jethro Tull.

As an artist he has recorded several albums under the moniker ‘Porcupine Tree,’ in which he recorded all the vocals and instrumentation himself.  More recently Wilson has released three solo albums using guest musicians. On his most recent project, Alan Parsons came out of semi-retirement to engineer.

“The Raven that Refused to Sing” is the current album he is touring with.  On Friday May 3rd, the tour stopped in Chicago at the Park West. Wilson could not have picked a more perfect location. The Lincoln Park showcase is a great venue with killer sound. At times during the performance, it seemed like some of the music was coming from behind my location, about ten rows of people from the stage. The crowd was about 75-80% male. A lot of them knew all the lyrics.
The music is a combination of Pink Floyd, King Crimson, early Genesis, and at times, Black Sabbath. A typical Wilson song can be anywhere from ten to twenty minutes long, with many tempo and mood changes and a lot of interwoven melodies and rhythms.

Wilson was quite chatty, telling a few stories and discussing what some of the songs are about.  “Are any of you in bands?” he asked the crowd. “Well don’t make the mistake of reading your reviews on Amazon.”  He added, “One reviewer commented on my Tolkien-esque lyrics.  I’ve never written any songs about Hobbits, Elves, or Gollem!” Wilson went on to explain that many of his songs are about serial killers and other deranged individuals.

Another comment was how much the band liked the movie “Spring Breakers,” as they introduced the song “Harmony Korine” from Wilson’s first solo album, named after the film’s offbeat director.

The entire show was almost two and a half hours, and the band was offstage for maybe five minutes.  They concluded with “Radioactive Toy,” an early Porcupine Tree number, to a thunderous applause from a very appreciative crowd.

The best song was “Holy Drinker.” Below is the song list, courtesy of setlist.fm