You are here: Home / Archives for Steven Wilson

If you thought that the progressive rock dinosaurs that dominated the musical landscape of the 1970s were all but extinct today, think again. Sure, bands like Yes and Jethro Tull are still churning out the classics on stages around the world, but in recent years the prog-rock scene has seen a full on rejuvenation starting in the ‘80s with Metallica, whose brand of progressive … END_OF_DOCUMENT_TOKEN_TO_BE_REPLACED 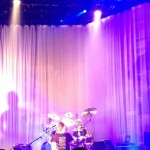 If Steven Wilson wanted publicity, he'd be a household name.  You may not have heard of him, but some of the biggest names in progressive rock have sought him out for his production skills.  The growing list includes, ELP, King Crimson, and Jethro Tull. As an artist he has recorded several albums under the moniker 'Porcupine Tree,' in which he recorded all the vocals and … END_OF_DOCUMENT_TOKEN_TO_BE_REPLACED