with Fred Wallin and Andy Dorf

On this edition of Dorf on Sports, Fred and Andy take a closer look at Tim Tebow and the success he is having. All the guy does is win, and people continue to say he can’t do it. We also talk about Chris Paul to LA but not to the Lakers. How will this impact the the LA market? Which team is a better ticket now? We also talk about the poor job that all of the commissioners are doing in their particular sports. Throw in a few calls from our listeners and its a full hour of high energy sports talk. To listen to the show check us out in Phoenix on 1100 AM, or online at 1100kfnx.com. Live show time is Wednesday nights 9-10 PM AZ time.

Today’s discussions centers around the Bears injuries and can they turn things around in Denver.  Will Oakland be the team to beat the Packers.  Plus, all the NBA and baseball free agent moves, the NFL round table, and a whole lot more.

Derrick Rose thinks the current roster of Bulls players has what it takes.  When asked about year’s season ending loss to Miami in the East finals.  He places the blame squarely on his shoulders. “It was on me,” says.  “It was the only reason why we lost the games. Little mistakes, turnovers, me not making the extra pass to the open guy.  Not having the confidence in my teammates.”

Rose, like his mates, is anxious to get back into practice mode.  He met with members of the Chicago media at the Bulls suburban training facility.  Coaches and team execs were not allowed to watch until the agreement is signed.

from our news wires

The Big Ten on Monday announced the 2011 All-Big Ten Teams along with 10 postseason individual award winners, as voted by conference coaches and a media panel. With a new era of Big Ten football beginning this season, the conference debuted its newly created postseason awards process that honors teams, coaches and student-athletes at conference institutions. All of the Big Ten’s biggest individual honors now bear the names of one or two former standouts each.  As part of the awards process, 10 of the individual trophies were announced Monday, two more will be revealed on Tuesday and five will be announced on Wednesday.

Nebraska’s Lavonte David took home the Butkus-Fitzgerald Linebacker of the Year honor, while teammate Alfonzo Dennard was named the Tatum-Woodson Defensive Back of the Year. Husker specialist Brett Maher was rewarded for his punting and kicking efforts this season with the Eddleman-Fields Punter of the Year and the Bakken-Andersen Kicker of the Year awards.

The Wisconsin backfield tandem of Montee Ball and Russell Wilson each won their respective position awards. Ball took home the honor named after former Badger running backs, the Ameche-Dayne Running Back of the Year honor, while Wilson becomes the first recipient of the Griese-Brees Quarterback of the Year accolade.

Ball was the lone unanimous selection to both the coaches’ and media’s All-Big Ten teams. Molk was selected as the coaches first-team All-Big Ten center, the second consecutive year he has earned that distinction. Defensively, Iowa’s Shaun Prater and Wisconsin’s Antonio Fenelus repeated as first-team performers with Prater earning the nod from the coaches and Fenelus being selected by the media.

The Big Ten also recognized 12 Sportsmanship Award honorees. The student-athletes chosen are individuals who have distinguished themselves through sportsmanship and ethical behavior. These student-athletes must also be in good academic standing and have demonstrated good citizenship outside of the sports-competition setting.

The Cubs have a new manager, the Packers try to stay undefeated, the Bears attempt to stay in the playoff hunt, and a big upset in college football are just a part of the discussion. Bruce Pinsler joins us with his thoughts on the Blackhawks and Northwestern.  All that and more on the program today.

On this edition of Dorf on Sports Fred and Andy talk about the Penn State Scandal. It is one of the most disturbing stories to ever come out of sports! We also talk NFL Football. Tim Tebow continues to win and the Cardinals continue to win without Kevin Kolb in the lineup! Comedian/actor Jon Lovitz stops by to talk some sports with Fred and Andy. Monique Marvez, comedian/actor also joins us to talk sports and life. Mix in a few calls from our listeners and its a full hour of sports talk radio. To listen to the show check us out online at 1100kfnx.com and call the show  at 866 536 1100. The program is live Wednesday nights from 9-10 pm AZ Time.

USC is touting their super wide receiver Robert Woods for the Biletnikoff award.

Ever the savvy marketers, they’ve compiled a video montage with music from Maroon 5

Everybody is talking about Penn State and we are no exception, Should the game against Nebraska be played? What will Joe Paterno’s legacy be? How does it compare to other college scandals? Also, the weekly NFL roundtable with Bears-Lions and Packers-Vikes previews. Lastly, a look at other college football games Saturday.

“If anything, we can learn from it and try to work on it in the future,” said Derrick Rose following a 96-94 loss to the Cleveland Cavaliers on April 27, 2010 that eliminated them from the playoffs.

2009-2010 made it two years in a row where the Bulls limped into the playoffs with a .500 record, and subsequently lost in the first round.  It was clear that point guard Derrick Rose was headed to do great things, winning Rookie of the Year his first year and getting selected as an NBA All-Star in his second year. But where were the Chicago Bulls headed?

Listen to an audio compilation of interview clips.

Looking back, it seemed that Chicago was at a standstill with their progress, so in order to start competing at the next level, changes had to be made. The front office took the first step by firing coach Vinny Del Negro on May 4th.  Del Negro, who had coached the Bulls for just two years, lacked the coaching experience that the young Chicago squad needed.  In fact, he had no prior coaching experience at any level, other than playing in the NBA for thirteen years which proved insufficient.

Then, on June 5th, the Bulls organization agreed to a three-year deal with Tom Thiobodeau, a former assistant coach for the Boston Celtics.

Initially, there was some confusion by the hire, as the average fan had probably never heard of Thibodeau.  However, around the league he was well-known.  His name was synonymous with defense and experience.  As the assistant coach for six different teams spanning eighteen years, and the assistant for the 2009 champion Celtics, Thibodeau was a good hire. 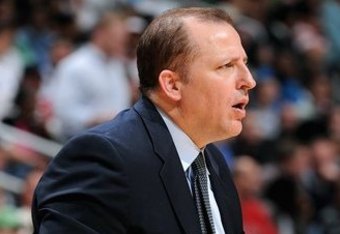 As Tom was introduced June 23rd, it was apparent that this was the right move for both sides.  Coach Thibodeau loved what he saw, “There’s a lot to sell here, obviously- the rich tradition of this organization, a great city, and a great young nucleus to build around.” The respect was mutual, “He’s got a great reputation around the league,” Bulls General Manager Gar Forman said. “Obviously, most of it is for his defensive knowledge and defensive credentials.” Forman also went on to say that he also has a creative offensive mind, but just wasn’t asked to use it in Boston.  “He’s coached in a number of big games. He’s coached in number of playoffs games. Everywhere he’s been they’ve had success.  He’s been a big part of coaching championship level basketball.” Forman added, “He’s got a great knowledge of the game.”

It was evident that this selection process was taken seriously by Chicago’s front office, trying to find the best fit, and they were extremely thorough in doing so.  Forman explains, “As part of our process we talked to a number of players that had played under Tom, and two of the examples that stood out were Yao Ming of Houston and Rajon Rondo at Boston, but the feedback that we got from the players that we talked to was that Tom was a terrific communicator and a terrific teacher of the game.” Most importantly, one of Forman’s last comments before he turned over the podium to Thibodeau, “He’s a winner.” END_OF_DOCUMENT_TOKEN_TO_BE_REPLACED

2020 and 2019: Thanks to everyone who continues to support us. The current licensing to legally play all the music you hear on Acid Flashback costs almost $2000 a year. Please help us defray this and other costs with a donation of any amount. … END_OF_DOCUMENT_TOKEN_TO_BE_REPLACED