first in a three part series…. 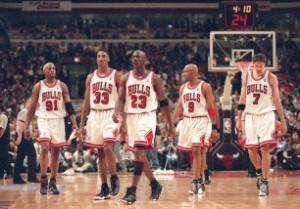 The 1995-96 basketball season began with more anticipation than normal.  The season started off with the Houston Rockets celebrating their second straight championship and one of the game’s greatest players would be making his return for a full season.  That player is Michael Jordan.   Jordan had taken an eighteen-month break from the game to go live out a childhood dream of playing professional baseball.  He took a swing (actually, numerous swings) at it and realized there was only one game for him and that was basketball.

Jordan (switching to the number 45) would make his return for part of the NBA season in March of 1995, but his Bulls would fall to the Orlando Magic in the NBA Playoffs in six games.  Jordan, back in his number 23 Bulls jersey, was out to prove a point.  The Bulls added a player who would go down as one of the greatest rebounders and defenders in the game and was once a hated rival, Dennis Rodman.  Head coach Phil Jackson raved about Rodman’s “individualistic nature” and said how much more “potent” this team became upon his signing.  Jackson wasn’t the only one excited about “The Worm” coming to Chicago.  Scottie Pippen was a fan as well.  “I appreciate and respect the work a guy like Dennis brings to the court,” Pippen said.   [ti_audio media=”2458″]  [ti_audio media=”2457″]

There was something special about this group of Bulls and their 41-3 start to the season added to that feeling.  Jordan went on to win the league scoring title averaging over 30 points a game, All-Star Game MVP, and league MVP.  He also made first-team All-NBA and was also a first-team All-Defensive player.  Dennis Rodman led the league in rebounding averaging nearly 15 boards a game.  Their record-setting 72 regular season wins assured them home court advantage seeing as how the second seeded team in the Eastern Conference finished with 60 wins.  The team was on their way to achieving what Michael Jordan called their “ultimate goal” in the preseason.  [ti_audio media=”2456″]

Postseason
The Bulls kicked off their postseason with a matchup against the Miami Heat, whom the Bulls made very quick work off sweeping them in three games.  The Bulls had a scare in game two when Michael Jordan went up for a layup and suffered what he called a “spasm.”  His right-hand man had to take over.  Scottie Pippen picked up where Jordan left off.  Coach Jackson took notice saying Pippen “knew he had to be the initiator.”   [ti_audio media=”2455″]

Round two pitted them against an old “friend” in the New York Knicks.  Jackson, Jordan, and Pippen all agreed the Knicks were a much more physical team than the Heat.  Jordan felt experience would play a major role in the next series.  “It’s time to perform at the highest level.  We’re not going to sweep ‘em.  I think it’s gonna be very competitive,” Rodman added.  They almost did sweep them, but the Knicks pulled one out and that was all they could muster.  The Bulls took the series in five games.  [ti_audio media=”2454″]

One obstacle stood in the way of the Bulls and their journey back to the NBA Finals.  It was the very team that eliminated them the previous year, the Orlando Magic.  They proved to be no match this time for the Bulls.  Orlando was handled easily in four games.  Now the Bulls could sit, heal, and wait for their opponent to come out of the West.  It would either be Karl Malone, John Stockton, and the Utah Jazz or Shawn Kemp, Gary Payton and the Seattle Supersonics.  The Western Conference Finals went the full seven games and it would be the Seattle Supersonics prevailing four games to three.

The stage was set.  One of the Bulls’ ten losses in the regular season happened to come against the Seattle Supersonics.  This time it was different.  This matchup was on the biggest stage there is in the National Basketball Association.  The Bulls took games one and two and would be heading to Seattle with a two game cushion.  Scottie Pippen wasn’t taking the lead for granted.  “We realize they’re going to play much better at home,” Pippen said following their four-point win in game two.  Game three was no different from the first two.  The Bulls walked away with a 108-86 victory and were one game away from hoisting their fourth championship trophy in six years.  Seattle found their legs and won the next two in convincing fashion and in the blink of an eye, this series got a lot more interesting.  The Bulls saw their lead all but disappear, but they would be returning to their home court with the following game coming on Father’s Day.  Michael Jordan’s father was murdered following the Bulls’ last championship season and this would be the first chance Michael would have to raise a trophy without his father.  It wasn’t a pretty performance, but the Bulls got it done defeating the Seattle Supersonics 87-75.  Jordan scored 22 points and Dennis Rodman snared 19 rebounds.  Jordan went on to win Finals MVP averaging just below 27.5 points a game.  [ti_audio media=”2453″]  [ti_audio media=”2452″]