You are here: Home / Music / Classic Rock / Song of the Day – Focus “House of the King” 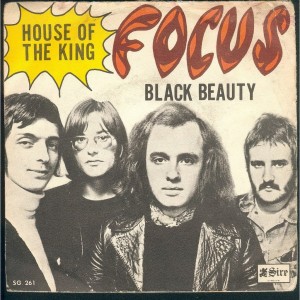 A couple of weeks ago my partner in crime Eric Berman featured Focus’s Top 40 hit “Hocus Pocus”. I’m here today to prove that this band was more than just a one-hit wonder, and in fact had many worthy songs. Back in the early 70s, the choice of TV channels was nowhere near what it is today. We had 2 frequency bands to choose from, VHF, which contained the major network affiliates, and UHF, which contained the independent local channels. These UHF channels would show, late on Friday and Saturday nights, horror and sci-fi B-movies. I remember very clearly the bumper music the local stations played when returning from a commercial break to that night’s cheesy movie, one stalwart was “Incident At Neshabur” by Santana, this was the other one. It was also the theme for not one, but two, popular BBC TV shows.

At the time, those who only listened to the radio and didn’t have a large album collection would have immediately attributed this song to Jethro Tull, but with forty years hindsight, us music freaks know that there were many other bands in that era that featured flute. With it’s classical music intro, and Jan Akkerman guitar break, the song provides needed respite from the awesome yet repetive acoustic guitar/flute main riff. The song was included on the re-release of their debut album Focus Plays Focus, which was entititled In And Out Of Focus, as well as the vinyl release of the album Focus III.