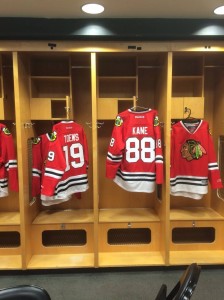 The Chicago Blackhawks held a press conference on Wednesday to officially announce the contract extensions of both Patrick Kane and Jonathan Toews respectively. Kane and Toews signed matching 8 year $84 million contracts that will keep the pair together until they are both in their mid-thirties.

It’s crazy to think that the duo has been together for seven years already, as we have pretty much watched them grow up right before our eyes. Toews is known for being a trusted leader and always maintaining a serious attitude, while Kane is known as a cool, confident, party animal that loves to have a good time.

Throughout the years the duo has became the NHL’S “odd couple.” Two buddies that pretty much came up together and that continue to push each other to always be at their best.

“I think we have a friendly competition that, as long as we’re together, that competition’s gonna keep getting greater and greater,” Kane said on Wednesday when asked about playing another 8 years with Toews.

While both Kane and Toews could have probably made more money by splitting up and going to different teams they know that they have something special here in Chicago and are not satisfied yet, even with two Stanley Cups in seven years.

Toews said the pair agreed on the contracts because they were paid what they thought they deserved and it gives the front office enough money to try to keep the teams core together for another Stanley Cup run.

“I think there is a balance there,” Toews said. “I think as far as looking at the team that we have; I guess the truths that do exist as far as trying to keep a solid, successful team together with a lot of key parts that go beyond just the two of us. Like we said, we’re very conscious of that and the success we’ve had as individuals on this team has a lot to do with the great teammates we’ve had along the way. We’re very conscious of what goes into that as far as keeping this team together.

So while it has been fun watching Kane and Toews grow up the last seven years, the next 8 may prove to be just as exciting.
Below is the full audio from Weds Press Conference at the United Center