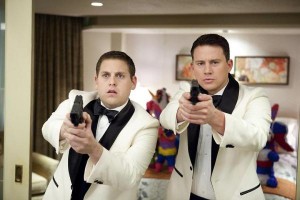 I was out of town when “21 Jump Street” first came out and was excited to finally see it. Adjectives such as “Hilarious”, “Incredibly Funny” and “Knee Slapping” were used to describe the movie by various national critics, so needless to say I was ready to bust a gut laughing. But a funny thing happened once I got into the theater, my funny bone must have disappeared. Or maybe, just maybe, the flick wasn’t as funny as portrayed.

The movie, of course, is a remake of the 1980’s show that featured a lot of young actors who went on to bigger and better things. Johnny Depp graduated from the TV show to the big screen and he does make a cameo in this flick.

The TV version was done on a serious basis while the movie goes the opposite direction looking for laughs. And, I will admit that the pairing of Jonah Hill and Channing Tatum was both ingenious and a big gamble. Not since the pairing of Mark Wahlberg and Will Ferrell in “The Other Guys” has such a diverse duo been paired up in a Bromance movie. My problem is that I don’t find Hill all that funny. The last comedy he tried to carry was “The Sitter” and that was incredibly bad. Ironically, Hill received an Academy Award nomination this past year but it came in a serious role in “Money Ball”

Actually Tatum is the funnier of the two and his background has been in more dramatic roles. But in “Jump Street” he is given the opportunity to deliver some laughs and he does. He’s almost like a male version of Marilyn Monroe who used to play the dumb blonde to perfection. Think the movie, “Some Like It Hot”. That’s Tatum in this movie, playing it dumb but funny.

Also getting a laugh or two is Ice Cube who plays the tough foul mouthed Captain who says Mother F—er almost as many times as Adam Dunn struck out last season. On a side note, my two favorite rappers are Ice Cube and Snoop Doggy Dog. Both can act and both can be funny.

The plot of “21 Jump Street” is rather mundane. Hill and Tatum are undercover cops assigned to a high school to bust up a drug ring. Along the way you get a lot of stereotypical juvenile humor and there are some laughs but no where near wall to wall like some critics would have you believe. In the beginning Hill and Tatum don’t like each other, then bond, then get mad at each other and you can pretty much guess the rest and the ending.

The producers and the movie studio must have been hoping that this flick would rake it in so a sequel could be made and the jury is still out on that. “Jump Street” was the #1 box office movie in it’s first week but we’ll see if word of mouth fortifies or kills it’s momentum.

I’m not going to say this is a horrible movie but I’m not going to go Ga Ga either like a lot of critics and say I laughed my ass off because I didn’t. Good idea, interesting casting but only a ground rule double – two stars on my report card.