You are here: Home / Entertainment / Movie Review: Men in Black 3 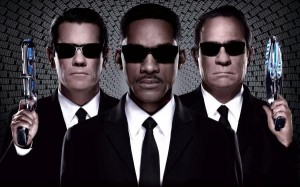 So far the summer has produced a few blockbusters (The Avengers) a few busts (Dark Shadows) and one pleasant surprise (Men In Black 3.)

Fortunately, the third installment of the MIB franchise has some fresh, original ideas, although time travel isn’t one of them. It’s always a crapshoot with time travel in movies, because of the paradoxes involved with changing history, so to speak.

But I’m getting ahead of myself. The basic premise is that Boris the Animal (in a nice performance from Jemaine Clement of ‘Flight of the Conchords’ fame) breaks out of a prison on the moon (yes, you heard that right.) then steals a time travel device. He uses this technology to go back in time to 1969, when he was arrested by Agent K (Tommy Lee Jones) and kills him thereby changing history. Will Smith as Agent J has to chase him back through time to prevent this event from occurring.

The best part of the movie is the performance of Josh Brolin as the 1969 version of “K.” He has got Jones’ mannerisms and dry nonchalant delivery down pat. Of course, Brolin and Jones worked together in “No Country for Old Men.”

As an MIB movie, it has the usual assortment of strange aliens and futuristic weapons. One of the amusing things are the 1969 versions of the MIB toys, such as the memory wipe device (the neurolyzer.) Also check out the use of some rock classic from the era, such as “Pictures of Matchstick Men.”

There are also a few awkward moments when the present meets the past, but I won’t ruin those.  Since Rip Torn has gone off the deep in real life, he’s been replaced by Emma Thompson as “X.”

Overall, it was very enjoyable, especially when viewed in 3D.

My rating – a home run, three and a half stars.