You are here: Home / Entertainment / Movie Review – The Avengers 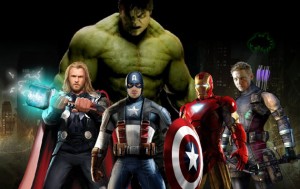 Once again I probably will be in the minority in my opinion but I just did not like “The Avengers”. I certainly wanted to and I definitely looked forward to seeing it but I was not only let down but also bored with it.

Credit though to the studio which raked in $200 million in just the first week of it’s release, and even more credit to their marketing department for setting up the scenario of making all this money.

The studio had the far ranging concept of introducing one Marvel character at a time and then eventually putting them all on screen at once to take advantage of the earlier successes. Consider that mission accomplished. First it was “The Hulk” then it was “Iron Man” followed by “Thor” and finally “Captain America”

Each movie did well on it’s own and in the process built up the anticipation for getting the gang all together. But a funny thing happened when they finally congregated on screen together. They had no chemistry. It was very much like a bunch of star basketball players trying to play with each other but they keep stumbling all over each other.

The plot in “The Avengers” is, of course, ridiculous. It’s the standard, someone wants to take over the world and a secret security organization decides to call in all the super heroes. Ok so far, but it quickly goes down hill. The crazed bad guy is Thor’s brother Loki, who wasn’t that interesting in the first movie and less so in this one.

“The Avengers” is way too long (over two and a half hours) and other then Robert Downey Jr’s Iron Man, the various super dupers are blase. Let’s take a look at them individually. Thor is a bore. The Hulk (now played by Mark Ruffalo,) just grunts and Captain America is a nerd. And then they decided to add in a few more characters for almost no reason. Scarlett Johansson plays Black Widow who has no powers but certainly looks good in a tight leather outfit and Jeremy Renner plays a modern day Robin Hood who keeps shooting arrows (yippee). Throw in Samuel Jackson as the one eyed Nick Fury who is just stealing a pay check in this flick.

In short this movie was drab and dull and I didn’t even mind that the mostly teen age crowd was talking through most of it. Their conversations were better then the ones up on the screen.

I had three and four stars by famed critics before seeing “The Avengers” and I convinced my self that i was going to see a good movie. And then afterwards I had to ask, what did these people think they were seeing? This wasn’t “Sophies Choice” or Up In The Air.” This was more like Shaq in “Shazam”…..what a let down. Just a weak single – one star for me “The Avengers”