You are here: Home / Entertainment / Movie Review – The Three Stooges 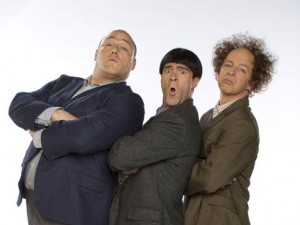 There is hardly a day that goes by that something doesn’t remind me of the Three Stooges. Very possibly because I have pictures and posters of them all over my house. But also because so many of their lines pop up into my head and I love using them in conversation. Needless to say that these comic geniuses had a profound (and whacky) effect on my early years and even now I crack up when watching the old shows.

With that in mind I was both excited and apprehensive when the movie came out bringing these guys to the big screen. The Farrelly brothers who have made audiences laugh with many of their movies (“Something about Mary,” “Dumb and Dumber,” “Kingpin,”etc.) were also big fans of the Stooges so the hope was that they would be able to somehow replicate the Stooges comic genius. I’ll give them an A for effort but in the long run they struck out swinging.

Chris Diamantopoulos, Sean Hayes and Will Sasso (Moe, Larry and Curly) definitely have the mannerisms down of the characters they play, but the laughs just weren’t there. Originally Benicio Del Toro, Sean Penn and Jim Carrey were supposed to play the lead roles but backed out maybe knowing that even they couldn’t do the parts justice.

The movie itself begins with the boys being dropped off as babies at an orphanage and they’re still living there thirty years later. Eventually they go off into the big world and shenanigans ensue. They do all the stunts (eye pokes, hair pulls, hammers to the head) that you’re used to seeing but the laughs aren’t there. And I’ve said it a thousand times, a comedy that doesn’t make you laugh is a failure.

The Farrelly’s litter the screen with plenty of big names but even they don’t inspire any emotion. I definitely wanted to laugh seeing Larry David on screen but he’s incredibly wasted. It’s like having a quarterback with a great arm and nobody to throw to (think Jay Cutler.)

Jennifer Hudson, Sofia Vergara (showing plenty of cleavage,) and Kate Upton make cameos as does the cast of Jersey Shore, but they don’t help out either. OK, maybe Moe poking Snooki in the eye elicited a slight chuckle, but then again I saw that in the trailer previous.

This wasn’t the worst remake of something that was fun to watch on TV. I unfortunately recall “The Beverly Hillbillies” and “Lost in Space” as being absolute schlock. But this was disappointing to say the least. No Nyuk Nyuk Nyuks from this failed venture and I rate it a weak single – one star.