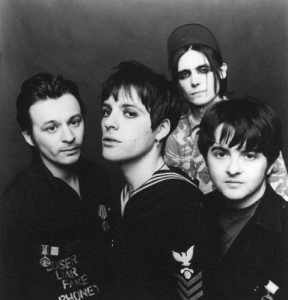 …When Manics song writer Nicky Wire announces their new album is the band’s last attempt at ‘mass communication’ it sets the average long term fan of the band on edge.Manic Street Preachers should not be consciously trying to communicate with the masses. They can be themselves or try something different thus inadvertently succeeding in doing so but to have that as your album ‘modus operandi’ is risky as it is likely to be disappointing.

Whether Manic Street Preachers intended to or not, their classic album ‘Everything Must Go’ managed to communicate with the masses. It did this because of two reasons in the main. Firstly, in the mid-nineties there was a commercial thirst for British bands who seemed to be authentically from the street, be that Burbage or Sheffield. The Manics knew this world and illustrated it well on that album. Secondly, said album contained several tunes which they simply haven’t got near subsequently so that the pop charts became their domain for rather a long time.

1998’s ‘This is My Truth, Tell Me Yours‘ was glossed in commercial paint but ultimately took them a step away from the public not so much musically but in intellectual terms. During the last decade mainstream success has eluded them because they have failed to deliver both ingredients in one meal. ‘Know Your Enemy‘ came closest while ‘Lifeblood‘ dallied between poles and ‘Send Away the Tigers‘ was doing a bad impression of ‘Everything Must Go‘.

Read the entire article on Rokpool.com