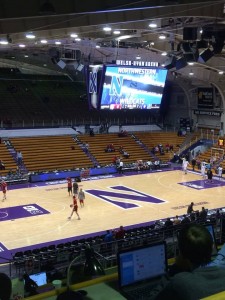 When you think tradition in college basketball, you have to think Indiana University.

The Hoosiers are five-time National Champions; they have made eight Final Four appearances, won 21 Big Ten Championships, and produced 44 All-Americans and 74 NBA Draft picks. Not too shabby at all.

The Northwestern Wildcats (14-14,5-10) on the other hand have produced a few solid seasons throughout the years, but have still never been invited to the “Big Dance.” In fact, the Wildcats last winning season came in the 2010-2011 campaign, when they finished 20-14 yet, still failed to reach the NCAA Tournament.

However, expectations have changed on campus in Evanston. After 13 seasons, Northwestern fired former head coach Bill Carmody in 2013, and replaced him with former Duke player and assistant coach Chris Collins. By bringing in Collins, Northwestern made it clear that it was time to put basketball in Evanston on the map and make a serious run in the Big Ten.

To no surprise, when Northwestern hosted Indiana on Wednesday night the team was greeted by one of their biggest and most intense crowds of the season. It is pretty clear the Wildcats and their fans want to be in the same class as Indiana, and Northwestern could be on the right track if they continue to play well in their zone defense.

Both teams came out firing in the first half Wednesday evening. Indiana, who entered the game 3rd in the country in 3 point field goal percentage (41.2) went 9-14 from downtown in the first 20 minutes, while Northwestern shot 5-13 behind the arc and 51% from the floor to enter the half tied at 40 even.

“I didn’t feel there was any way we could win a shootout. So 40-40 at halftime … I didn’t feel good about it,” Collins said. “The pace was too fast, it was too high-scoring. We weren’t going to win a game in the 80s. I thought we did a better job in the second half of getting stops and kind of getting it more to our liking.”

The second half would be a nice glimpse of what the future may hold for the Wildcats and proved that coach Collins young squad is ready to compete and is not intimidated by any team, no matter how many championships they have won.

After a Dave Sobolewski foul, Wildcats freshman Vic Law would have words with Hoosiers guard Yogi Ferrel- which ignited the crowd and would swing the momentum in favor of Northwestern.

After the heated exchange, fellow Wildcat freshman Scottie Lindsey would block an Indiana layup attempt-leading to a Tre Demps three pointer to give the Wildcats a six point lead and force Indiana to take a timeout with the crowd growing louder and the momentum clearly in Northwestern’s favor.

Indiana (19-10,9-7) would have no answer the rest of the way going cold in the second half, shooting only 28% on 9-32 shooting from the field. Leading scorer Yogi Ferrell would score only 11 points and Indiana struggled to find scoring in the paint as the Wildcats would take control for good

Tre Demps would continue to torch the Hoosiers. The junior guard would score a game high 23 points on 8-12 shooting and the Wildcats would cool of the Hoosiers in the second half, to win their fourth straight game in the Big Ten, 72-65.

“I have great respect for the history of the program, but for me it’s all about what we’re doing going forward,” Collins said. “All I know is that the kids worked incredibly hard since I’ve been here.”

Alex Olah would contribute 17 points and 11 rebounds, and Freshman Vic Law would score 14 to give Northwestern their fourth straight conference win after losing ten straight.