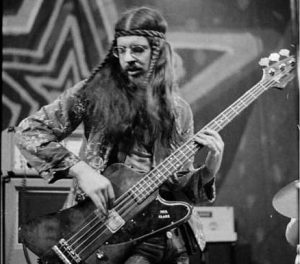 In 1970, after recording the first three classic Jethro Tull albums This Was, Stand Up, and Benefit, bassist Glenn Cornick was fired by the band, as his lifestyle was more social and substance-oriented than that of leader Ian Anderson and some of the other band members. Not missing a beat, Cornick formed Wild Turkey, which after some personnel changes recorded its first album Battle Hymn, released in 1971. With a lineup consisting of Cornick, Jon Blackmore (guitar and vocals), Jeff Jones (drums, formerly of Man), Alan ‘Tweke’ Lewis (guitar), and Gary Pickford-Hopkins (from Eyes of Blue) on vocals, they created a hard rock album that withstands the test of time and is still listenable today.

Today’s song, “Butterfly” features machine-gun drumming, dual lead guitars a la the Allman Brothers, and a solo guitar tone to die for even to this day. With a strong prog-rock vibe, it is reminiscent of both Captain Beyond and the aforementioned Allman Brothers. So what’s not to like about this tune? Nothing, check it out.