You are here: Home / Featured Interview / Ray Manzarek Dead at 74 – Audio Interview from 1994 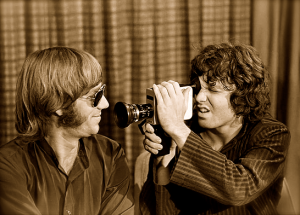 Author’s note: It’s been three years since Ray passed away. We bring you our old interview once again….

I was saddened to hear of Doors’ keyboardist Ray Manzarek’s passing. He died in Germany after a long battle with cancer.

While Jim Morrison may always be the public face of the band, Manzarek and guitarist Robby Krieger were the life blood of the band, taking Jim’s fanciful ideas, as well as Robby’s own pop songs, and setting them to music.  Drummer John Densmore kept the beat on the skins. Krieger wrote a number of songs as well.  “Light My Fire” comes to mind.  Manzarek not only added the keyboard tracks, but the bass lines as well, when the group couldn’t settle on a bassist.

It was Ray whose chance meeting with his UCLA film school classmate at  Venice beach in 1965 was the laid the foundation for The Doors.  It was Manzarek who recruited two members of his mediation class in Kreiger and Densmore to join the fledgling group.

Back in 1994 when the first iteration of the Acid Flashback was on the air, we were looking for some interviews with ’60 icons to supplement the music we played.  It was decided we would pursue Manzarek.

Ray spoke rather candidly about hallucinogens, his solo projects, his Chicago upbringing, the Oliver Stone Doors movie from three years earlier, and of course, Jim Morrison.

This entire interview has not been heard in nearly twenty years, but Doors fans should enjoy this.  It was conducted by phone with Dr. K. (Louis Kaplan, an original DJ on the original Acid Flashback show) and myself.