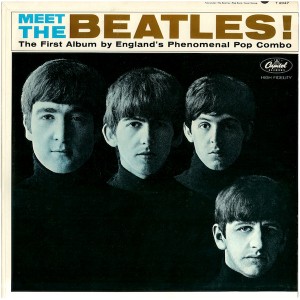 1964, The Beatles scored their first number one album with Meet The Beatles! The album stayed at the top of the charts for eleven weeks.

1965, American singer and pianist Nat King Cole died of lung cancer. His first hit was the 1943 “Straighten Up and Fly Right.” Cole also had the 1955 US number two single “A Blossom Fell,” the 1957 UK number two single “When I Fall In Love,” plus over 20 other US and UK Top 40 singles. He was the father of singer Natalie Cole, and in 1956 became the first black American to host a television variety show.

1968, US blues harmonica player Little Walter died from injuries incurred in a fight while taking a break from a performance at a nightclub in Chicago. First harmonica player to amplify his harp giving it a distorted echoing sound. He joined Muddy Waters’ band in 1948.

1968, The Lennons and Harrisons arrived in India to study meditation with the Maharishi, Paul McCartney and Ringo Starr arrived four days later. Ringo returned before the others comparing the experience to be “like a Butlins holiday camp.”

1969, The Who performed at Dreamland Fun Park in Margate, Kent, England.

1969, Led Zeppelin played the second of two nights at Thee Image Club in Miami, Florida. Thee Image was a converted bowling alley, with all of the lanes stripped out and standing room only. The stages were on the center back wall.

1969, Singer Vickie Jones was arrested on fraud charges for impersonating Aretha Franklin in concert at Fort Myers, Florida. No-one in the audience had asked for their money back.

1969, Sly and the Family Stone started a four week run at number one on the US singles chart with “Everyday People,” their first chart topper.

1970, The Daughters of the American Revolution announce that there will be no more rock concerts at their Constitution Hall in Washington, D.C. Seems the organization was miffed that Sly & the Family Stone sparked a riot after turning up five hours late for a gig there.

1973, The Grateful Dead appeared at the Dane County Coliseum in Madison, Wisconsin.

1977, Glen Matlock was fired as bass player from The Sex Pistols, being replaced by Sid Vicious. Matlock rejoined in the ’90s when the Pistols reformed.

1981, American guitarist Mike Bloomfield was found dead in his car in San Francisco from an accidental heroin overdose. He was a member of the Paul Butterfield Band and Electric Flag. Bloomfield played on Bob Dylan’s album Highway 61 Revisited.

1997, U2 went to number one on the UK singles chart with “Discotheque,” the band’s third UK chart topping single. The entire track was leaked onto the Internet in December 1996, forcing U2 to move up the release date.

2000, BBC Sessions, the collection of live and studio Who tracks recorded for the BBC from 1965 to 1970, was finally released in the US and Europe. European purchasers get the extra tracks “Man With Money” and the complete “Shakin’ All Over/Spoonful” unavailable on the US disc. However, American purchasers have the option of getting a seven-track bonus disc unavailable in Europe if they buy BBC Sessions at Best Buy department stores. The CD peaks at #101 in the U.S., #24 in the UK and #50 in Japan.

2008, A flat once rented by The Beatles in London went up for sale for £1.75 ($2.8) million. The band shared the three-bedroom top floor property in Green Street, Mayfair in the autumn of 1963. A publicity photo of the Fab Four peering over a banister, used as the cover for the December 1963 edition of The Beatles Book, was taken at the top of the property’s communal stairwell.