You are here: Home / Music / Blues / Song Of The Day by Eric Berman – “Cry Me A River” by Julie London 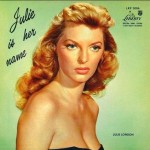 It would be hard to think of Julie London without all of the sexy cheesecake album covers, but behind all of the va-va-voom was the va-va-voice which was soft, supple and sexual.

Today’s Song Of The Day was written by Arthur Hamilton specifically for Ella Fitzgerald to record. However, Ella didn’t get around to recording it until her 1961 album called Clap Hands, Here Comes Charlie.

Julie London recorded the song in 1955 for her Julie Is Her Name album and sang it in the film 1956 The Girl Can’t Help It which propelled it up to the #9 position of the charts. Backing London on this recording was the great guitarist Barney Kessel and bassist Ray Leatherwood.

To most people my age, “Cry Me A River” is probably best known by Joe Cocker’s indelible rockin’ version from 1970’s Mad Dogs And Englishmen album and tour. Cocker’s version is great, but it doesn’t hold a candle to the original.