You are here: Home / Music / Country / Song of the Day by Eric Berman – “Golden Gate Gospel Train” by The Golden Gate Quartet 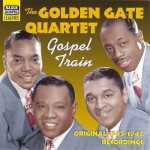 Today’s Song of the Day by Eric Berman shines a spotlight on what I like to call holy rollin’ prehistoric Doo Wop, which is better known as Gospel Jubilee.

The Golden Gate Quartet started out as a Barbershop Quartet in Virginia back in the early 1930s comprised of two friends from the Booker Washington High School glee club, the barber and a one-legged bass singer. By the time the group began to perform for audiences during the late 1930s, the quartet featured Orlandus Wilson, Willie Johnson, Henry Owens and Clyde Riddick who soon migrated to North Carolina where their brand of Jubilee Gospel was featured all over the radio airwaves.

By 1937, they came to the attention of the Victor Record company who began recording their sides (including this 1937 track) for the Bluebird label. The Golden Gate Jubilee sound was a heady brew melding barbershop harmonies, jazz and scat singing and country hillbilly music with a healthy helping of old time religion. Their sound was a great influence on groups like The Ink Spots and many of the Doo Wop groups of the 1950s. The quartet performed for close to 70 years with Riddick staying in the group until he retired in 1995 and Wilson’s death in 1998, and the group still exists in some form today. Incredible, their most recent album was released in 2010.

Listen closely and you can also here a sample of this very song in Paul Simon’s “Love and Blessings,” from his latest studio album So Beautiful or So What.