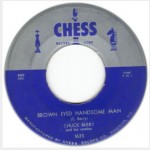 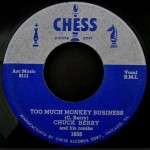 The great thing about having a jukebox is that you can make the B-side of a single the A-side with a flip of the record in the slot. Today’s jukebox classic is one such record that I purchased specifically for the B-side and changed them around.

“Brown Eyed Handsome Man” was the flip side of Chuck Berry’s fifth single for Chess Records, “Too Much Monkey Business,” and was also from his 1956 debut album After School Session. The track was recorded in April of 1956 and featured Johnnie Johnson on piano, L.C. Davis on tenor sax, Willie Dixon on bass and Fred Below on drums. Even though the song was designated as the B-side of the single it was on, it still managed to place at #5 on the R&B charts. It was also one of the few singles in the juke that was originally released as a 78rpm first.

Berry was one of the first literary rock and roll songwriters whose sophisticated prose and observational skills created songs that described his world with pinpoint accuracy. “Brown Eyed Handsome Man” was a sly comment on race relations that was written after Berry witnessed an arrest of a Hispanic man in California. In it, Berry also brags about the appeal of black men to white women, much to the chagrin of 1950s white America.

The song has been covered by the likes of Buddy Holly, Johnny Rivers, Nina Simone, Waylon Jennings, Robert Cray, Paul McCartney, and it was also performed by Johnny Cash, Carl Perkins, Jerry Lee Lewis and Elvis Presley when they convened at Sun Studios for the relaxed jam session that is now known as The Million Dollar Quartet.

The real A-side to the single was “Too Much Monkey Business,” that according to Chuck Berry’s autobiography was meant to describe the types of hassles a person encounters in everyday life. The song was recorded at the same session as its flip and also featured Johnnie Johnson on piano, Willie Dixon on bass and Fred Below on drums. The song climbed to #4 on the Billboard Jukebox Play chart.

It has been covered by the likes of Elvis Presley, The Beatles, The Hollies, The Yardbirds, the Kinks and Eric Clapton to name but a few, and the song was a huge influence on  Bob Dylan’s “Subterranean Homesick Blues.”

2020 and 2019: Thanks to everyone who continues to support us. The current licensing to legally play all the music you hear on Acid Flashback costs almost $2000 a year. Please help us defray this and other costs with a donation of any amount. … END_OF_DOCUMENT_TOKEN_TO_BE_REPLACED