You are here: Home / Music / Classic Rock / Song Of The Day by Eric Berman – “Outside Now” by Frank Zappa 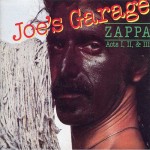 I’ve always had a love-hate relationship with Frank Zappa’s Joe’s Garage record. As usual, Zappa’s heart was in the right place when it came to issues like government control, censorship and organized religion, and he certainly could play guitar. But I never really got off on Zappa’s scatological and somewhat immature lyrical side.

Joe’s Garage highlights the best and worst of what Zappa had to offer. For amazing guitar work and musically challenging material, you didn’t have to look much further than tracks like “Watermelon And Easter Hay,” “Packard Goose” and today’s Song Of The Day “Outside Now.” Even though some of the lyrics are a little wanting, they work because the music is so good. Listen to this track and it’s hard to deny that Zappa was one of the greatest guitarists of all time.

However, the Joe’s Garage albums are littered with songs that are perverted and immature like “Crew Slut,” “Keep It Greasy” “Wet T Shirt Night” and “Catholic Girls” that offer little in the realm of enlightenment. Now, I do have a sense of humor and I get Zappa’s brand of satire, but unfortunately many who listen to this stuff take it seriously and that’s where things get a little sticky for me.

That said, I do believe they will be studying the music of Frank Zappa many years into the future…