You are here: Home / Music / Classic Rock / Song Of The Day by Eric Berman – “Toledo” by Elvis Costello & Burt Bacharach 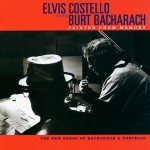 THE SUMMIT…that’s the term Fran Sinatra coined to sum up the grouping of Sammy Davis, Jr., Dean Martin and himself many years ago. To me, THE SUMMIT equals two of my very favorite artists collaborating together for an album and a tour…and one of the greatest performances I’ve ever seen!

Elvis Costello was always a fan of Burt Bacharach. He covered his song “I Just Don’t Know What to Do With Myself” right from the beginning of his career. The Bacharach-Costello collaboration began with the song “God Give Me Strength” which was written for the exceptional 1996 Allison Anders film Grace of My Heart” which was loosely based on the story of 1960s Brill Building pop songsmiths.

After the film, the two worked together by email and telephone and found they had a knack for writing great songs. They continued their long distance collaboration writing a batch of songs that became their sole album from 1998, Painted From Memory which today’s Song of the Day by Eric Berman was culled.

Here fans got the best of both worlds…Bacharach’s singular and angular way with a melody matched with Costello’s knack for the turn of a phrase. The ensuing 1998 tour was, for my money, a meeting of two of the greatest songwriters of all time…right up there with Lennon and McCartney!