You are here: Home / Music / Alternative / Song Of The Day by Eric Berman – “2012 (You Must Be Upgraded)” by Flaming Lips with Ke$ha and Biz Markie 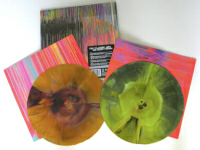 This one comes from a Record Store Day release “Flaming Lips And Heady Fwends.” The limited edition double album was released on two “hand-thrown” colored discs, and each one is uniquely colored. The album was also released in two versions defined by a version of this song. The more desirable version features a “Cybermen” sample from the BBC TV series “Dr. Who,” the other more common version has Henry Rollins approximating the sample with his own voice. Like many Flaming Lips records, “Heady Fwends” is a mixed bag of truly inspired psychedelic confections and really awful in-jokes. Other “Heady Fwends” who make appearances on the collection are Yoko Ono & The Plastic Ono Band, Chris Martin, Jim James of My Morning Jacket, Bon Iver, Edward Sharpe & The Magnetic Zeros, Eryka Badu, Nick Cave and many others.