You are here: Home / Music / Alternative / Song Of The Day by Eric Berman – “Baby Get Worse” by Divine Fits 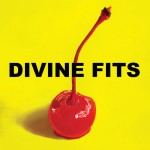 When I first started playing Divine Fits’ debut album, “A Thing Called Divine Fits,” I immediately gravitated to the songs that featured Britt Daniels on lead vocals. Daniels formed the band with Dan Boeckner of Wolf Parade and Sam Brown of New Bomb Turks while on hiatus from his band Spoon. In fact, it was Britt Daniels and the Spoon connection that led me to this album in the first place. What I found was that this record is chock full of really good glam-infused tunes written by each band member with a heaping helping of ‘80s synth-pop and punk rock thrown in for good measure. This track, featuring Dan Boeckner on lead vocals, immediately caught me off guard and insinuated itself into my cranium. It is firmly on “repeat” mode in my iPod.