You are here: Home / Music / Classic Rock / Song Of The Day by Eric Berman – “Chicago” by Tom Waits 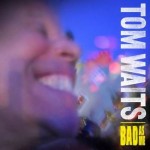 He’s become more and more reclusive as the years go on, rarely performing in public. When he does tour, he sporadically makes one theater stop per city and then you don’t see him again for many years. Last fall, several TV appearances were booked concurrent with the release of Tom Waits’ first album of new material in seven years, “Bad As Me.” Without any reason given, the dates were cancelled and no TV or tour promotion occurred for the album. Many months later, Waits has decided to pick up where he left off and begin promotion efforts on his latest record including the two originally booked TV dates. The first one happened last night on David Letterman’s “Late Show” where this performance of “Chicago” was performed. The band includes Tom’s son, Casey Waits on drums, David Hidalgo of Los Lobos, Larry Taylor (Bob Dylan), Augie Myers (Sir Douglas Quintet) and “Big” Bill Morganfield (the son of McKinley Morganfield – aka Muddy Waters). The second performance will happen tonight (7/10/12) on “Late Night with Jimmy Fallon.”