You are here: Home / Music / Classic Rock / Song Of The Day by Eric Berman – “Crazy Love” by Van Morrison and Bob Dylan 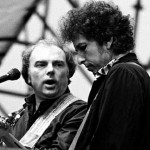 Van Morrison is one of the few musicians who can breathe the same rarified air as Bob Dylan…and in my book, he is right up there on the Mt. Rushmore of rock. So here’s a clip of the Belfast bard and his royal Bobness performing one of Van’s classics from the “Moondance” album. The clip was filmed in Greece at the tail end of Dylan’s 1989 tour. On a beautiful, sunny day, the two climbed up the Hill of the Muses in Athens and performed a four-song set in front of BBC cameras including this song, “And It Stoned Me,” “One Irish Rover” and “Foreign Windows.” The footage was captured for the BBC documentary “Arena: One Irish Rover – Van Morrison in Performance.” Oh, to have been one of those cameramen…