You are here: Home / Music / Song Of the Day by Eric Berman – “Don’cha Go ‘Way Mad” by Frank Sinatra 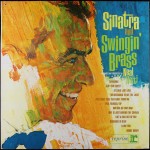 Another “Mad Men” era favorite by America’s favorite playboy. Back in 1962, Sinatra was the epitome of that “Ring A Ding Ding” era with his Rat Pack buddies tearin’ up the Vegas town on a nightly basis. Oh to be a fly on the wall for some of them hi-jinx! This one, like yesterday’s “Wives And Lovers,” comments on the subservient role women played during the early ’60s. It has lots of nerve and swagger as it nonchalantly asks the woman to forgive and forget her man’s fling…but at least it does swing! It comes from the album “Sinatra and Swingin’ Brass” and was written by Jimmy Mundi, Al Stillman and Jazz saxophonist, Illinois Jacquet. The arrangements come from the one and only Neal Hefti.