You are here: Home / Music / Song Of The Day by Eric Berman – “Favourite Shirts (Boy Meets Girl)” by Haircut 100 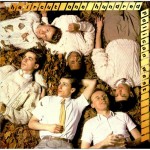 Nothing like a wacky band name! Haircut 100 were rivaled only by A Flock Of Seagulls in the New Wave band name wars of the early 1980s, but you could always tell the bands apart by their hair styles (…and their trousers…they were tight…). Haircut 100 were formed in 1980 by lead singer Nick Heywood and while they did score four top ten singles across the pond, in America they are primarily remembered by this song and its follow-up single “Love Plus One.” Both songs were on their very popular debut album, “Pelican West,” where the band dabbled in a slick brand of dance, punk’n’funk influenced by XTC and Talking Heads. The band’s popularity in America was largely due to the heavy rotation their videos received on MTV.