You are here: Home / Music / Classic Rock / Song Of The Day by Eric Berman – “Freedom Fighters” by Todd Rundgren’s Utopia 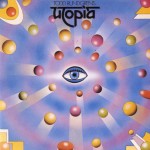 They were originally billed at Todd Rundgren’s Utopia for their first few albums in 1974 and 1975, and then they just became Utopia…but under any name they were just another vehicle for Todd to go all prog on us instead of sticking to the radio-friendly pop and blue-eyed soul that he’d been serving out up to this point. Sure, we’d had a taste of the wiggy Todd before on the albums “A Wizard, A True Star” and “Todd,” but Utopia’s first foray featured just four songs all over ten minutes long with the exception of this one. In fact, the entire second side of the album featured the 30 minute opus, “The Ikon,” which is required listening for any Todd-ophile. The original line-up of Utopia included Moogy Klingman and Ralph Schuckett on keyboards, M. Frog Labat on synths, John Siegler on bass, Kevin Ellman on drums and Todd on guitar and vocals.