You are here: Home / Music / Alternative / Song Of The Day by Eric Berman – “I Can’t Put My Finger On It” by Ween 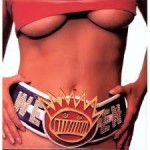 I post this track with heavy heart as the news broke today that one of my all-time favorite bands have decided to pack it in for good. I’ve been a WEEN fan since the early 1990s and have seen Dean (Mickey Melchiondo) and Gene (Aaron Freeman) numerous times over the years. I could have seen this coming since Deaner has been focusing more on his fishing business while Aaron continued to perform solo shows over the past couple of years between Ween tours. Aaron released his first solo record last month called “Marvelous Clouds” consisting solely of songs written by 1960s easy listening “poet” Rod McKuen. Although the band has always released good records, their concerts over the years have grown a little tiresome due to their fan base taking their somewhat misogynistic lyrics seriously instead of as a joke like they were intended to be taken. This song comes from their 1994 album “Chocolate And Cheese.”