You are here: Home / Music / Classic Rock / Song Of The Day by Eric Berman – “I Just Can’t Help Believing” by Elvis Presley 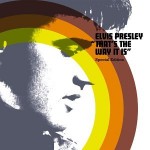 Everybody has a favorite version of Elvis: the hip-swivellin’ 1950s hep-cat, the swarmy good ‘ol boy of his many second rate films, the leather-clad comeback kid of 1968, the sequined-suited star of Vegas, and, sadly, the fat bloated disaster of the late ‘70s before he met his maker, 35 years ago today. My particular favorite is the post-comeback Vegas Elvis of 1970 as heard and seen in the film “That’s The Way It Is.” The film was shot at The International Hotel in Vegas in August 1970 and it highlighted the fabulous entertainer Elvis could be when he took himself somewhat seriously. Here we have his cover of the Barry Man-Cynthia Weil classic “I Just Can’t Help Believing” which was currently a big hit for B.J. Thomas at the time of this recording. Elvis’ was touring with his finest band featuring the ever dependable James Burton on guitar, John Wilkinson on rhythm guitar, Glen D. Hardin on keyboards, Jerry Scheff on bass, Ron Tutt on drums, Charlie Hodge on guitar and vocals, plus Millie Kirkham, The Imperials and Sweet Inspirations on vocals. If you’ve never seen the film, what are you waiting for? If you have, now’s a good time to see it again!