You are here: Home / Music / Song Of The Day by Eric Berman – “I Turned You On” by The Isley Brothers 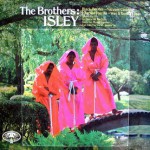 From gossamer to “grit-tay”…yesterday I featured a track by the smooth soul group, The Delfonics…today we’re going gritty with this funky 1969 track by The Isley Brothers. They were one of the longest running R’n’B groups of all time forming in Cincinnati, Ohio in 1959 and recording and touring together in some form through 2010. At the time of this recording, the group consisted of brothers Ronald, Rudolph and O’Kelly Isley and their cousin Chris Jasper. Brothers Ernie and Marvin were listed as musicians but weren’t full time members of the group yet. They would join as full members in 1973 with the release of their landmark album “3+3” and the smash hit “That Lady.” The Brothers were responsible for such indelible hits as “Shout,” “Twist And Shout,” “This Old Heart Of Mine (Is Weak For You),” “Black Berries,” “It’s Your Thing,” “Pop That Thang,” “Love The One You’re With,” “Summer Breeze,” “Fight The Power,” “Harvest For The World,” plus many others. This song comes from their 1969 album called “The Brothers: Isley.”