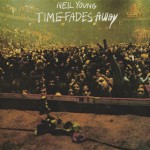 A song from what has become the great lost Neil Young album, “Time Fades Away.” The album was recorded on the 1973 tour that followed Young’s biggest album “Harvest,” but as usual Young did not give in to fan expectations and performed mostly new rock’n’roll material on the tour that had little or no connection to the country sound of “Harvest.” He has said in interviews that “It was recorded on my biggest tour ever, 65 shows in 90 days. Money hassles among everyone concerned ruined this tour and record for me but I released it anyway so you folks could see what could happen if you lose it for a while.” Young was so dissatisfied with the murky sound of the record and what was going on with him and the band personally, that he never released it on CD. It has been completely out of print for many years, yet it contains some of his greatest songs including “Don’t Be Denied,” “Journey Through The Past,” the title track and this song.