You are here: Home / Music / Jazz / Song Of The Day by Eric Berman – “Chick’s Tune” by Blue Mitchell 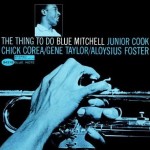 Trumpeter, Blue Mitchell crossed the line between jazz, pop and rock numerous times during his brief career recording straight-ahead Jazz records as a leader or as a sideman with Horace Silver, Jimmy Smith, Jackie McLean, Charlie Rouse, Cannonball Adderly, Grant Green and many others. He also toured and did session work with the likes of John Mayall, Papa John Creach, Tony Bennett and Lena Horne. The Chick referred to in the title of this tune is none other than Chick Corea who was a member of Blue Mitchell’s Quintet from 1964 through 1969. This track comes from the 1964 album “The Thing To Do” which also features Al Foster on drums, Junior Cook on tenor sax and Gene Taylor on bass. The song was written by Chick Corea and was based on the melody of the standard “You Stepped Out Of A Dream.”