You are here: Home / Music / Blues / Song Of The Day by Eric Berman – “Moanin’ At Midnight” by Howlin’ Wolf 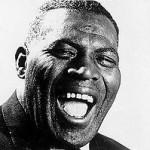 It doesn’t come any more lowdown and spooky than this track by the wolf man of Chess Records. Chester Burnett’s stature in American music is as dominant and as imposing as his 6’6” 300 pound frame was. With a repertoire that includes such blues classics as “Smokestack Lightnin'”, “Killing Floor,” “Back Door Man,” Spoonful” and “300 Pounds Of Joy,” he pretty much fed the entire British Invasion with material to record. Burnett may have learned to play guitar from blues great Charley Patton in the 1930s, but his low-down delivery was wholly his own. Here is one of his earliest Chess sides from 1951 that perfectly encapsulates all that made Wolf a legend.