You are here: Home / Music / Classic Rock / Song Of The Day by Eric Berman – “Psalm” by Roxy Music 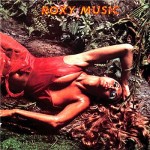 By the time of Roxy Music’s third album, “Stranded” in 1973, Brian Eno had left the fold and gone were the atmospheric synthesizer rushes as well as the overall experimental progressive nature of the band. It was replaced with a more straightforward, art-rocking glam-tastic sound with Bryan Ferry at its center. Eno’s replacement was Eddie Jobson, an accomplished keyboard player who had been a member of prog group Curved Air and would go on to perform with the likes of UK, Yes, Jethro Tull and Frank Zappa to name a few. He also freed Ferry from his keyboard duties allowing him to focus on lead vocals as epitomized by this epic-length track recorded at The Royal College Of Art in London in June of 1972. “Stranded” was also the first Roxy album where Phil Manzanera and Andrew Mackay began contributing their own songs to the band, resulting in the band’s first bona-fide classic album. The cover model on “Stranded” was Marilyn Cole, who was a Playmate of the Year and Ferry’s girlfriend of the time.