You are here: Home / Music / Song Of The Day by Eric Berman – “Soul Kiss” by Joe Jackson 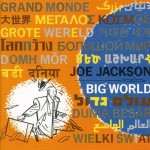 For an artist as ornery as Joe Jackson was on stage berating his audiences regularly; he did come out with some of the sweetest and most articulate music of his time. While critics were rightly comparing Elvis Costello to Irving Berlin and Cole Porter, they kind of missed out on the real carrier of their torch in Joe Jackson. The “Big World” album was conceived on stage and recorded in a controlled live environment in front of audiences. After the three-sided, 2 record set came out in 1986, he took to the road to promote it, hence this video. “Soul Kiss” is one of his funkiest songs, with a piano part that rivals anything Elton John ever came up with. Twenty-six years later, the music resonates and hasn’t dated at all. Indeed, it is still a “Big World.”