You are here: Home / Music / Classic Rock / Song Of the Day by Eric Berman – “The Jolly Banker” by Wilco 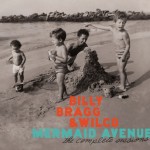 Back in 1997, British political folkie Billy Bragg joined forces with all-American rock band Wilco to compose and record music for lyrics left behind by the late, great Woody Guthrie. The recordings resulted in the two-volume “Mermaid Avenue” albums. Some songs were recorded by Bragg backed by Wilco and some were just Wilco songs. This one is just a Wilco recording featuring the 1997-lineup with Jay Bennett on piano and organ. Last week, both “Mermaid Avenue” albums were re-released along with a third disc of 17 previously unreleased or hard to find recordings from the sessions, and a documentary DVD about the recording of the records. Here is a cover of a song Woody Guthrie did get a chance to record on his own, and, although it’s been available to stream since 2009, it makes its debut on the third disc of previously unreleased recordings.